If there is one place that will test your perseverance it’s definitely Hollywood. In today’s world where everyone wants to be famous, the standards for becoming a celebrity are actually higher and it is hard to make ends meet solely from jumping from one audition to another – especially when you are starting a new career.

Considering that it pays quite well in comparison to others and the hours can be quite flexible, bartending in Los Angeles or any other major city easily fits the needs financially to break into the glamorous Hollywood world.

Here is a list of celebrities who used to tend bar: Before The Daily Show became a worldwide comedy phenomenon, when Jon Stewart was still navigating through Hollywood, he used to work in City Gardens – a punk rock club located in New Jersey where bands like Nirvana and The Ramones ruled the scene.

Far from easy, Jon in his interview with Vulture recalled several occasions where things escalated and he found himself in a situation where bottles were flying, and he “ended up with the gun behind the bar”. Sure sounds like a Hollywood scene! In his early days while making his way in the theater, Russell Crowe had a role in The Rocky Horror Picture Show.

However, the check he received for it was not enough to cover his expenses, so he worked not only as a bartender but also as a fruit stocker.

He even used his musical skills on the streets of Australia and New Zealand just to make ends meet. Talk about devotion! It is no secret that comedians don’t earn that much. At the beginning of her career, Ellen DeGeneres took several different jobs.

She used to wait tables, shuck oysters, painted houses, sold vacuum cleaners from door to door and even bartending!

But all of this paid off as she eventually found her way to stand-up and started building on her now-world-wide famous brand. Oscar-winning actress Sandra Bullock used to bartend at the very beginning of her career.

When she finished her education from East Carolina University, and while she was doing her first auditions, Sandra used to bartend to support herself and pay the bills. Before the hit show Grey’s Anatomy took the spotlight, and before landing her famous Meredith role, Ellen Pompeo used to be quite the hustler!

According to her interview in Playboy magazine, Ellen used to bartend after she graduated high school, and apparently, she was better at hustling than making drinks.

Ellen is quoted to say “I wouldn’t say I was a good drink maker, but I was a very good hustler. I’d abuse the customers, yell and scream at them and make them wait. If they put money down on the bar and it wasn’t enough, I’d go wait on someone else who was giving me enough money. If they put another five down and I made them wait longer, pretty soon there would be $20 on the bar. Then I’d come over and give them a drink.”

Who would have thought she was that awesome? 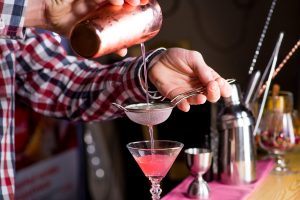 General,
Does Bartending School Help You Get A Job? Continue Reading » General,
When Should I Register For Bartending School? Continue Reading »