Before you begin your bartending career, there are a few things to learn! Don’t worry, we at National Bartending School are here to help you, not overload you with information! That’s why we’ve put together this handy list of 10 bartending terms that everyone needs to know, before they set foot behind a bar! This is a great first step, and one that everyone can familiarize themselves with, whether you want to bartend, or just be a knowledgeable bar patron!

A shot is a small yet potent drink, generally but not always consisting of a single alcohol alone, or occasionally two mixed together. Though the quantity varies by establishment, it generally measures between 1.25 and 1.5 ounces in the USA. These are ingested in one drink, not sipped. They cup in a tiny cup called a shot glass.

A cocktail is an alcoholic mixed drink consisting of two or more ingredients. One of the ingredients must contain alcohol. These drinks can be made by building, shaking, or stirring. Commonly ordered cocktails are Whiskey Sours, Margaritas, and Long Island Iced Teas. Many involve mixing an alcohol and a juice or soda together, and adding a garnish.

This term means that the beverage you are ordering is being served over ice. Usually it is a singular alcohol served in a rocks glass, such as a Vodka on the Rocks, but it can also be a mixed drink, such as a Margarita. This drink is always chilled. To build or layer a drink means to pour the ingredients straight into the glass in which it will be served. The bartender adds the alcohols one at a time, generally pouring the heaviest alcohol first, followed by lighter alcohols and juices or sodas. Many highball drinks are made this way, such as a Cape Cod or a Greyhound. They are generally served with ice.

A shaken drink is built in a cup, one ingredient at a time. The cup is then poured into a shaker with ice cubes, and shaken until it is chilled throughout. Then it is poured into a glass through a strainer, and new ice is added if the drink required ice cubes. Many drinks are shaken and served chilled but without ice.

A drink ordered as a “Double” means that it has double the amount of alcohol in the drink, but the same amount of other ingredients. Generally a single drink contains about 1.5 ounces of alcohol, so a double will equal 3 ounces. These tend to be very strong drinks and heavily taste of alcohol.

When someone orders a drink “Neat”, they want nothing added to it. It is served in a glass, with no ice, and no mixers. It is always served room temperature. A lot of times drinks like this will be served as a double. Even though this is often the same amount that is poured as a shot, it is usually served in a rocks glass, and generally sipped.

A mixer is everything put into a cocktail that does not contain alcohol. This can mean juices such as orange juice, grapefruit juice, and cranberry juice. It also refers to pre made mixes like margarita mix and bloody mary mix. Lastly, it can mean any type of soda, from Coca Cola to tonic water to ginger ale. A mixer is anything nonalcoholic that is in your drink.

To free pour is to pour straight from the bottle using a spout. To do this, a bartender uses a method of measurement where they count to determine how much alcohol they have poured in a given amount of time. This is useful in a fast paced environment, when using a jigger for measurement would take to much time or be inconvenient.

Now that you’ve familiarized yourself with this list of terms, you’re more than ready to take the next step towards a bartending career! Call your local National Bartending School via our contacts page, and find out about affordable and convenient bartending certification! 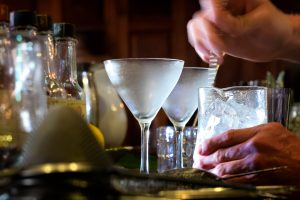 General, Service,
How much does bartending school cost? Continue Reading » 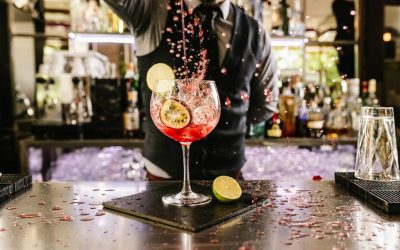